You have to love the name of this product: 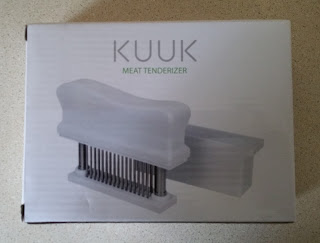 This is a great kitchen tool to have around. My niece had been wanting a tenderizer for a while and I was going to just get her something from Kohl's or Target's, but I never did! I would always forget that it was something she wanted until we were getting ready to prep some food... Yeah. Anyway, when I saw this, I jumped at the chance to get it. (Thought my niece would be just thrilled, but I actually ended up using it before she got around to it. Cos she's always like that.)

As I have said in another review of this item, it's not my mama's kitchen gadget. Of course, my mama used what her mama used...

I took after my mama too, but I eventually got a little more modern. For a long time I had something like this: 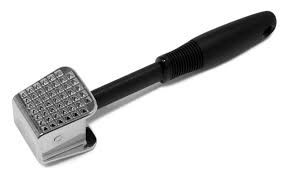 Or, I went totally off the grid and just used one of these: 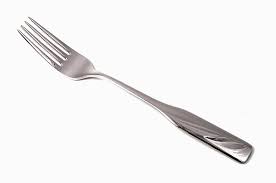 All of those tools will get the job done, but there are some problems. Safety is a big issue (especially for someone with my iffy motor skills) and, even if you don't end up stabbing or hammering a finger, there quality of the finished product. Who wants meat that has been ripped up with a fork or beaten into a ragged mess with one of the old-fashioned tenderizers?

The Kuuk tenderizer takes care of the safety issue and it does more than just tenderize whatever cut of meat you're prepping. Notice the "teeth" on the Kuuk.

In the above photo, I have the handle depressed so you can see the blades (that I call "teeth"!). But those teeth are kept completely - and safely - stored away when they aren't in use.

I actually like "thinning out" those thicker cuts of meat (which I usually only buy when they are priced better than other cuts), but I could never keep control of the old-fashioned type tenderizer. I'd mostly end up with, say a pork chop, that was either beat all to hell or not well tenderized.

With the Kuuk's tenderizer, you are basically depressing those blades into the meat evenly and consistently. Because the blades all depress at once when you push on the handle, you can't mess up and mangle a cut of meat the way you can with a standard tool. 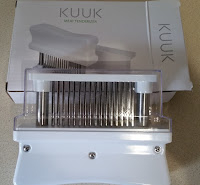 Before I forget, here's a little tip that I learned after using the Kuuk a few times: if you want to get tenderize near the bone in a cut of meat,  just place the tool close to the bone and, while you are depressing the blades, kind of move the tool around. It helps "stretch" the meat out and then you can get the blades nearer the area.

In addition to this being such a useful kitchen tool, I'm happy that it cleans up easily. Though it's dishwasher-safe, I literally just swish it around in a shallow dish of hot and soapy bleach water, then rinse - cos, um, meat, germs, bacteria... Once it's clean and dry, the tenderizer tucks back into the clear plastic cover. The whole thing is small enough to fit into a kitchen drawer, but I leave ours on the counter next to the knife rack because it barely takes up any space.

In summary: Simple to use, simple to clean, simple to store. Also, right now, the cost is under $12 with Amazon Prime or via this site that is also selling the item.

DISCLOSURE: I received one or more of the products mentioned above for free using Tomoson.com. Regardless, I only recommend products or services I use personally and believe will be good for my readers.