I'm taking a couple days' break from reviews. I've received so many EOs for cleansing and moisturizing, I need to let my body (and skin, and hair) rest! I've washed my hair so much that I've rid myself of future dirt.

Today, I want to talk about memories. I've been in that mood. I was telling my niece the other night about the times I used to spend around Big Mama. My memory sucks so I probably tossed in memories that were handed down from my older brothers and sister.

We talked about how Big Mama would fix these huge and amazing breakfasts. When I say that breakfast at Big Mama's was an experience, I mean that even my mother (the Texan) was impressed. There were no simple, egg-and-bacon deals at Big Mama's. There's not a fast food chain around that could emulate these meals without adding a buffet line.

The first time I had a Big Mama breakfast, I thought I'd migrated in my sleep and woken up in the planet of No Freaking Way.

First there was the food: slices of ham, fried pork chops, pan-fried potatoes, thick slabs of bacon, grits  with salt and pepper, and biscuits that so huge and buttery-good that I think they are what the Israelites called manna. There were also eggs - scrambled eggs, sunny-side up, boiled and sliced - but who the heck could think about eggs with all that other food? One of my brothers used to joke that just two of those biscuits could feed half of a small continent.

Then there was the fact that there were so many people at the table. Family that lived two and three blocks away showed up for breakfast at Big Mama's. Talk about getting a start to the day, right? It was like a daily family reunion before folks went off to school or work or back to their own homes for the day.

The most impressive thing to me about those breakfasts - the thing that I never got over, even after I was used to all the food and family - was that they happened while dawn hadn't even thought about breaking. Seriously.

For a time, when my father moved our family there while he went overseas, we had to look for temporary housing. In the meantime, my mother, my siblings and I stayed in Big Mama's house. I'd feel like I'd just gone into REM sleep when I'd hear Big Mama walking around doing her morning wake-up calls.

"Rise and shine, everybody. The Lord has blessed us all to see another day!"

I'd just be wishing that the Lord would bless us to sleep another couple of hours. But, in Big Mama's house, no one was aloud to lay around in bed unless they were sick. Big Mama believed in that early-to-bed and early-to-rise thing. Super early. Crazy early. Early to bed like a narcoleptic wino, and early to rise like a rooster with anxiety issues.

Still, I loved being around my Big Mama. Miz Minnie Lee to a lot of people, but always Big Mama to me. She had her ways though...

Big Mama had in common with a lot of people of her generation when it came to how you raised and treated children. I always think of this image when I think of my Big Mama: 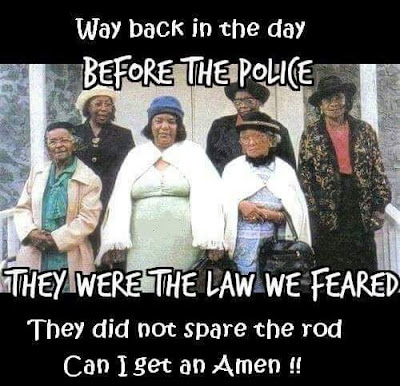 After she fed us all to stuffing before the crack of dawn, Big Mama made us face the day with prowess. During the school year, Big Mama could get 30 kids out of the house - on time, nourished, clean, looking good and feeling like there was nothing they couldn't do. She was like a fierce wind that pushed you out that door and into the world like all your dreams were just waiting for you to collect them. Even with all that freaking food in you.

Side note here about my aunties: I have the best aunties in this world. One of my aunties was a lunch lady at the elementary school. Who always got a fresh cinnamon roll for school breakfast? And who never had to worry that all the chocolate milk was gone? Me, that's who! (And I want to find that lost cinnamon roll recipe because I have never had one like those since childhood.)

One of my other aunties was our lioness. She'd run off bullies with a broom (true story), chaperon teen socials, carpool kids all over the neighborhood after the weekend get-togethers, and make sure that any stray kid was looked after.

Big Mama raised those aunties of mine. No surprise that they are all women to be reckoned with.

I guess I'm just glad that I have so many good memories of my Big Mama. I wish that so many of the younger people I know could have experienced that kind of love.

Today, people like to call my Big Mama's kind of love "tough love". It wasn't tough, it was just love.