Anyone who reads my blog regularly know that I have a condition that requires me to take certain medicines. One of those medications is a weekly injection that happens to make me dog-sick for about 30 hours. (Yeah, I have actually counted and done an average!)

A couple of weeks ago, after I got especially med-sick, I decided to put some of my talk about natural products into action. To get my energy up and keep the nausea at bay, I made a cocoa just full of healthy stuff.

Here are the ingredients - along with why I chose them. I have to tell you that I am in love with this cocoa. I have been drinking it the last couple of days just because. I will drink it during the day (instead of coffee), or at nighttime if I feel cold.

I make about a 9 ounce cup of whole fat milk for the beverage  but I will let you come up with your own measurements. It all depends on how bitter or sweet you want your finished product. I like mine on the bitter side so I use about 1.5 Tablespoons of cocoa powder. Every other ingredient amount depends on what mood I am in. Also, I only make my beverage on the stove top. I use a small pan and a whisk on low-to-medium heat. It takes a while and I guess you could heat your milk in the microwave then add the other ingredients, but I like the old-fashioned way.

First, measure out your milk into whatever cup you will drink from. This way you won't make too little or too much. If you don't have a whisk, use a large fork so you don't get clumps of cocoa and cinnamon. Add the dry ingredients to the milk in your pan a little at a time - especially if you are working without a whisk. Whether you use a fork or a whisk, you want to keep stirring while the mixture is on the heat so you don't get that "skin" film right away.

Cocoa powder has lots of health benefits, but the one I am interested in is that it fights fatigue. Here is just one article discussing the pros. Also, I wanted to include something from WebMD that discusses more benefits and even warnings. 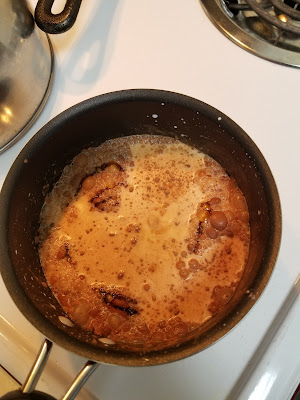 
The taste of this is not as "sharp" as regular cinnamon. It's a lot softer so you can use more than you might think.  This explains Ceylon cinnamon basics.

The cinnamon is mostly for the benefits to my mental health. There are other pros to cinnamon, but you have to be watchful. The thing is that there is "good" cinnamon vs the kind with an ingredient that can be damaging. Once I learned that over-indulging in certain types of cinnamon can damage the liver, I started using only Ceylon cinnamon. This is the brand I like and happen to be using.

I use this as the sweetener in the cocoa beverage. Sometimes, I use more molasses (just over a half tablespoon)  and don't add any other sugars; sometimes, I add less (around a teaspoon) and include some raw granulated sugar. Depends on my mood.

'Strap is high in iron and calcium. I use the unsulphured molasses and there is a difference between this and the sulphured variety. You will see why I prefer unsulphured. There are tons of benefits, in my opinion, and good nutritional value. One I focus on is that it's a "bone booster".

As much as I raved about this, I stopped using it on a regular basis some months ago. I was getting ready to move and could have used the energy boost but needed more ways to incorporate the molasses into my daily intake. This cocoa is a great way. Also, now that I have a full kitchen to use again, I cook more and like to  sweeten hot cereals and other dishes with the molasses. 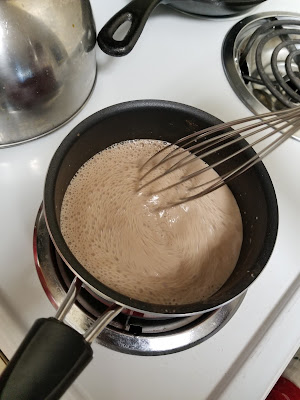 (A little mention that, even for people who don't like the taste of molasses straight from the bottle, it's got a really good taste when added to milk and stirred well. That's how I take it when I just want to get a quick dose.)

I only add a drop or two of this. I don't add it when heating the cocoa, but just drop it in when I'm about to drink up.

Everyone I know loves the flavor of vanilla in some form. Not many people use the actual and real extract or even understand the benefits.

Vanilla extract has anti-inflammatory and anti-oxidant properties. Those are the two important ones I care about. There are other good reasons to add the extract to this cocoa.

NOTE: Try to rinse out your pan immediately. Milk and cocoa are tough to clean later. I also just add some water to the dirty pan and put it on the still warm stove top until I'm ready to wash it out.