The Great Alcan Adventure of '91

Sometimes I do way too much complaining on this blog. Oh, poor me. Grieving me. Sad and single me. In reality, I've had a really good life. I always had a good family - even though there were times I've been embarrassed to claim some members. I've had a lot of great friends - who sometimes seemed more like family. Basically, I've been loved and protected. I think that's why any time life throws me a curveball (I don't even know what an actual curveball is, people) I get all up in my "oh woe is me" feelings.

Tonight (and keep in mind, please, of how I schedule posts all over the calendar!) some of my family was over and we got talking about some of the good times we've had. Not that we always recognized until much later how good those times were.

We talked about the very first time my sister and I moved our mom and the kids to Arizona. Yes, there was a time we lived in Arizona before the time I had my fantastic drunk Mother's Day adventure. That first time, we moved because we thought the weather there would be better for Mom. What a mistake. She was getting older and the long Alaska winters seemed to be wearing harder on her. Since I was the primary breadwinner, it was my say to make that move. Again, I say, what a mistake.

So we sold our house and packed up the kids and made the move. If only it had been as easy as that sounds.

By the way,  I just checked my old posts and cannot believe I never talked about that first drive down the Alcan  (Alaska-Canada)  Highway. That highway is the only way to drive out of Alaska to the Lower 48.

So, let me tell you a little of what I can remember about that drive back in October 1991 (and I had to text and ask my niece what year it was).


The adventure started about a month before we left Alaska. The house sold with no problem. We had the closing and move-out dates and I had my last day of work scheduled. Okay. Things seemed great. Until my oldest brother checked out our car and declared it not safe for the drive to Arizona. That car had barely been safe for the drive to the corner but, hey. We had never had great cars. We always had a house (or trailer) though. It was tough having everything when we had kids not covered by an employer's insurance but that is another story for maybe never.

Anyway. We had to hurry and shop for a reliable, used car that would hold us - three adults and 3 kids. Our 2 older girls were teenagers but one of them had a history of terrible car sickness. On such a long drive, we all would end up wanting to put her out on the side of the road at some point so we decided to fly her to Seattle. She would stay with family until we picked her up for the rest of the drive to Arizona.  The twins were just about 6 years old and small enough to squeeze into even a small vehicle. My sister and I would swap out on the driving and sitting in the back passenger seat. Mom would ride shotgun. Oh boy.

My brother managed to find a car that fit our budget but it was old and he was still a little worried. Between him and my other 2 older brothers, it was decided that we'd let the car get us as far as it could then if need be, we'd just fly the rest of the way. Since flying would be expensive, I prayed to God that wouldn't happen. Then when I saw the car my brother had found, I just prayed to God for the money to fly from the get-go. Like I said, my brother hadn't had a lot of time to find a car we could afford but did he have to find one with a manual transmission?

Neither my sister or I had ever learned to drive a stick shift. However, my sister was brave and I still had a brain that worked perfectly. And my sister-in-law was the best person to teach us how to drive this Subaru because my not-patient-at-all oldest brother would have ended up causing too-sensitive me to have a nervous breakdown. By now, we had about 8 days before we'd be heading out on our grand adventure. Yeah.

On the Saturday before my last week at work, the SIL drove my sister and me to a deserted school parking lot. (Quick note that matters to this story: my SIL is part Inupiat Eskimo.) She patiently explained how to use the clutch and the gear shift and told us not to stress. "Just remember to ease off of the clutch. It helps if you just relax." She drove a few laps around the lot to show us how it was done and then turned the driver's seat over to my sister.

Now my sister, "Mike" was always a get-it-done kind of person. She didn't have to like a task but if something needed to be done, she just wanted to get it over with. I've never been as confident. I need coaxing. So I was glad that Mike was going first. I cowered in the back seat while the SIL coached from the front passenger seat. She told Mike to go a couple of laps around the lot, taking it as fast or slow as she felt comfortable.

Listen. Mike apparently decided to just go balls to the wall. She TOOK OFF and we shot forward so fast that my head slammed back and my braided extensions were flying around my face. We took a turn so fast that I slid across the back of the seat. Mike was changing gears and clutching so hard that the car was jerking and lurching like it was having seizures. And the whole time, my sister-in-law was holding her stomach and laughing like we were on the best thrill ride ever. She was laughing so hard she might not have been breathing. At one point - when Mike made a turn that almost had the car on two wheels - my SIL was either praying in Inupiat or speaking in tongues. Mostly though, she was laughing.

I was absolutely terrified. My sister had never driven a stick before and she was careening around the parking lot like we were being chased. My sister-in-law was NOT IN CHARGE because she couldn't stop laughing. I was close to having that nervous breakdown I thought my brother would've caused.

And then suddenly, Mike slammed on the brakes and the engine died. Nothing was wrong with the car (except maybe frightened), she was just done. She had proved she could drive a stick shift.

And that's how Mike was about tough things. We had to deal with a lot of tough things. We were 2 women in charge of a house with an elderly parent and 4 kids. My sister was the person you'd want around in an emergency because she would deliver the baby or fight off the intruders or negotiate the hostage situation without worrying about the danger. Only once the dust had settled, she might admit to having been scared out of her mind. She was super brave in the right situations. And then there is me.

By the time I got into the driver's seat, my sister-in-law was mostly chilled out and under control. Mostly. I was almost sick with nerves. The first time I tried to move the car forward, it died. And the second time. And the third time. It took forever before I got the hang of doing what my sister-in-law coached and just "eased up off the clutch".

Anyway, I finally did get the hang of it. Kind of.  I never got past stalling out the engine anytime I was on the slightest incline but I was determined not to let the car beat me so I even drove us home. The five-minute drive took about half an hour. I learned to hate traffic lights. They all saw me coming and went to red every time. Every single time. Having to stop wasn't the problem but I would stall out when it was time to move again.

My sister was comfortable enough to drive herself to the grocery store that weekend. I rode along and tried to watch how she worked the clutch. She only stalled out once. I needed to get over my anxiety because guess what? I had to get myself to work all the next week. Not to mention the 3000-mile drive that was coming up fast.

Understand that I have never liked driving anyway - except for that short period of time just after I first learned as a teenager. You know, back when I felt immortal. To this day, I don't like to drive and have always said that if I won a lottery, the only luxury I'd go after would be a full-time driver.

I was so freaked out thinking about driving the Subaru to work that I made myself ill. I didn't sleep well on Sunday night and on Monday I woke up with a nervous stomach. I thanked God in heaven that winter was at least several weeks away. I still wished I didn't have to drive that stick shift.

On Monday I put off leaving for work as long as I could. Then I couldn't wait anymore. And guess what? I made it. I humped and bumped that Subura right into my employer's parking lot. I even made it back home okay - although when I kept stalling out at one traffic light, other drivers started losing patience. The nice lady driving directly behind me is probably why I didn't get my butt kicked by someone else that day. Once I got the car going, she followed me home with her flashers on. We did about 20 mph all the way. Other cars were going around us and giving me dirty looks. I want you to remember that part. Just remember that part. 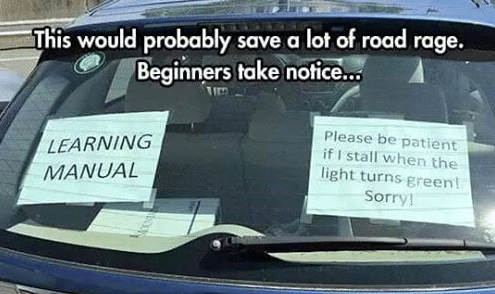 I did eventually get the hang of driving the Subaru without too much trouble. I had no choice because no matter how I worked the budget, it was the car we were stuck with.

Now, I can't remember exact dates we had planned to head out of Anchorage but I know that it was sometime in the last couple of weeks of September. If it hadn't been for our budget, I wouldn't have had to work so long into the fall season. Normally - or at least back then - the first snow wouldn't hit Anchorage until after Halloween. Like I said, I can't recall specific dates but let's just say that we had meant to hit the road on a Sunday. Well. It snowed on Saturday. And I mean it SNOWED.

I have to take a pause for now. If you are interested, come back over here in a day or so and you can read about what happened when we finally did set out towards the border. Good times.

PS - Apologies for the crappy errors. I think I've caught and fixed most of them
at May 30, 2019 No comments: Links to this post