Well. I finally got my lazy ass to an eyeglass place and got my specs. Kind of scary riding with my friend once I could see just how bad she drives. I'd forgotten. This is a woman who has severe road rage issues. She also has an obsession about two other things: smoking and her hair. One time she tossed a cigarette out the car window and when it blew back in on her hair, she damn near killed herself swatting at the cherry. But she has pretty good taste so I let her pick out my frames.

So, I started out wanting to make this a post about observations on race and the recent U.S. election. I have several, and in thinking over them, I realized what a conflicted person I am:

Why does it seem that we have evolved in so many ways yet stood frozen in time in other ways? I've read too many reports of ignorance from those against Obama - but none that discuss specific reasons against a black president. (Okay, I've seen one report discussing/not discussing it.) Here's some of the ignorance:

A kid thinking... An actor (the "message didn't mean anything"? Really, Sam? Damn)... And the randomness.

~sigh~ What a world this is.

Okay. Enough seriousness. Now for the silliness! (And, yes, I realize some of you may be offended. Look, I've learned to laugh at a LOT of things.) 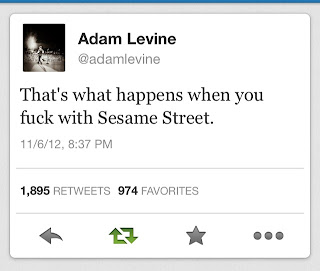 
A little boy was watching his mother in the kitchen making a chocolate cake from scratch.

While the mother had her head turned, the little boy went to the table dipped both hands in the chocolate frosting and covered his face with it.

The mother turned around to see what the boy was doing. She screamed:  "Boy, what the hell are you doing?"

The mother became enraged and slapped the crap out of her son. She then said "Boy, go show your father what you’ve done!"

The boy then walked into the den where his father was reading and said "Look Daddy! I'm black!!"

The father put his magazine down with a very puzzled look on his face (seeing the chocolate on the boy's face.)

The boy came to him and the father smacked his son across his head.

The boy then slowly walked to his grandpa who was on the porch.

The grandfather took the boy over his knee and proceeded to spank him.

"That'll teach you! Now go back in the kitchen with your mama!!!"

The boy walks back in the kitchen and the mother said, "I hope you've learned your lesson, young man!"

The boy says with a scowl on his face, "Hell yeah! I've been black for 5 minutes and I HATE you white folks already!"


Now, being serious again: think about the different ways that all hope for a better world really do belong to our children - if we teach them right. There should be an awareness that we all have to live here on this planet together. I want my nieces and nephews to not have a need to be tolerant because they will just naturally accept others as fellow human beings.