And Now for Some Smiles

Usually, I put all the funnies over on my other blog, but this one could use something light after the past few days. This is from an email I got from my aunt...


Why Did the Chicken Cross the Road?


SARAH PALIN: The chicken crossed the road because, gosh-darn it, he's a MAVERICK!


BARACK OBAMA: Let me be perfectly clear, if the chickens like their eggs they can keep their eggs. NO chicken will be required to cross the road to surrender her eggs. Period.


JOHN McCAIN: My friends, the chicken crossed the road because he recognized the need to ENGAGE in cooperation and dialogue with ALL the chickens on the other side of the road.


HILLARY CLINTON: What difference at this point does it make WHY the chicken crossed the road?


GEORGE W. BUSH: We do NOT really care why the chicken crossed the road. We just want to know if the chicken is on our side of the road or not. The chicken is either with us or against us. There is NO middle ground here.


BILL CLINTON: I did NOT cross the road with that chicken.


AL GORE: I INVENTED the chicken.


JOHN KERRY: Although I voted to let the chicken cross the road, I am now against it!  It was the WRONG road to cross, and I was MISLED about the chicken's intentions. I am not for it now, and will remain against it.


AL SHARPTON: Why are all the chickens WHITE?


OPRAH: Well, I understand that the chicken is having PROBLEMS, which is why he wants to cross the road so badly. So instead of having the chicken learn from his mistakes and take falls, which is a part of life, I'm going to give this chicken a NEW CAR so that he can just drive across the road and not live his life like the rest of the chickens.


ANDERSON COOPER: We have reason to believe there is a chicken, BUT we have NOT yet been allowed to have access to the other side of the road.


NANCY GRACE: That chicken crossed the road because he's GUILTY! You can see it in his eyes and the way he walks.


PAT BUCHANAN: To STEAL the JOB of a decent, hardworking American.


MARTHA STEWART: No one called me to WARN me which way the chicken was going. I had a standing order at the Farmer's Market to sell my eggs when the price dropped to a certain level. NO little bird gave me any Insider Information.


ERNEST HEMINGWAY: To DIE in the rain, alone.


BARBARA WALTERS: Isn't that interesting? In a few moments, we will be listening to the chicken tell, for the first time, the heartwarming story of how it experienced a serious case of molting, and went on to accomplish its Lifelong Dream of crossing the road.


ARISTOTLE: It is the NATURE of chickens to cross the road.


BILL GATES: I have just released eChicken2014, which will NOT only cross roads, but will lay eggs, file your important documents and balance your checkbook. Internet Explorer is an integral part of eChicken2014. This new PLATFORM is much more stable and will never reboot.


ALBERT EINSTEIN: Did the chicken really cross the road, OR did the road move beneath the chicken?


COLONEL SANDERS: DID I MISS ONE?

Laughter really does the heart good!

Email ThisBlogThis!Share to TwitterShare to FacebookShare to Pinterest
Labels: humor

Sharing Views of the Valley

Life is full of highs and lows.

The past couple of months have been rough and necessary. I managed to hit rock bottom emotionally and get to a peak in my faith. I could not have survived the bottom without the peak or reached the peak without hitting the bottom. Life is odd, painful, beautiful and crazy.

These are some thoughts that came out of my recent ups and downs. I tend to deal with most of my feelings through a sort of creative and passive-aggressive use of my words.  There is a story behind every one of the photo-texts but I don't have the energy or ability to focus long enough to get them written. Good thing about it is, I've come out renewed and re-motivated.

Feel free to use any of these for non-commercial use as long as you credit/link to www.freebeingfree.blogspot.com 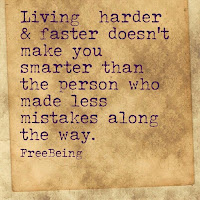 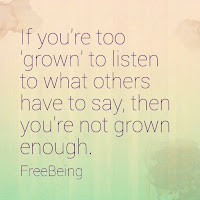 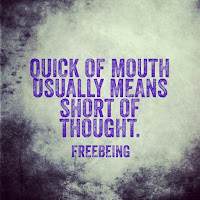 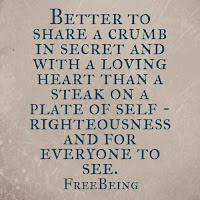 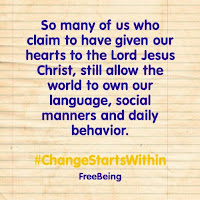 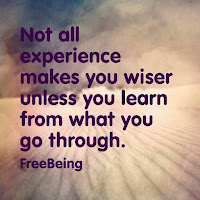 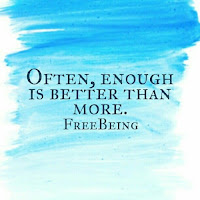 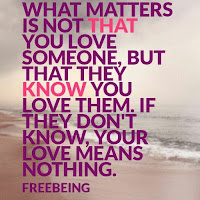 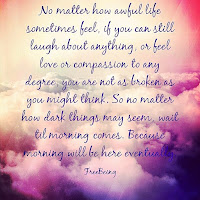 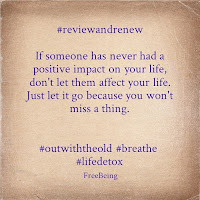 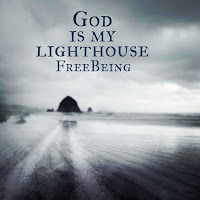 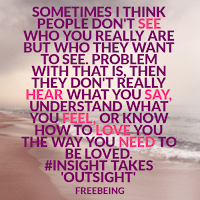 The Devil is STILL a Liar

Six years ago, I wrote a semi-humorous post about a saying I grew up hearing in church: "The Devil is a liar!"

This is the not so humorous sequel about what the Devil will and won't tell us.

He'll tell you that all money is good money because any money will spend.
He won't tell you that you can't spend money as well if you're dead or locked up.

He'll tell you, when you are at your peak, that you can do it all, have it all and be it all.
He won't show you how to cope when you hit your lowest point and can't do, have or be anything that you once could.

He will tell you that because some people who are doing stupid, ignorant, illegal or immoral stuff and seem to be happy, unconcerned, or getting away with it, that you should too.
He won't' remind you that there is a reason some things are considered stupid, illegal or immoral. He doesn't want you to think about the people doing those things who aren't happy. unconcerned or getting away with anything.

He will tell you, especially if you are very young or very vulnerable, that YOLO (You Only Live Once).
He won't tell you that how you live at any age matters and has consequences. He won't remind you that you only live this life once.

He will tell you that you should want to be like the celebrities you see in the media. That you should be living the life they are living.
He won't tell you that, just like the rest of us, those people get sad, sick, worried, heartbroken and, eventually, dead. He won't remind you that feelings - good or bad - are the same whether a person is wearing designer clothes or handed down rags. He won't' remind you that some things cost more than money and that some people have paid for what they have with something more precious than gold.

Most of all, he will tell you that where you are now in life - whether in success or failure, joy or sorrow, wealth or poverty - is you will remain.
He doesn't want you  to know that everything he tells you is a lie. He doesn't want you to have hope or true happiness. He wants to hold us hostage to our present so that we don't think past it. He will hold our past over our heads so that we live in regret of mistakes or past glory. Most of all, he doesn't want to think that there is any more to life than what we have gained or lost.

Email ThisBlogThis!Share to TwitterShare to FacebookShare to Pinterest
Labels: faith, hope, Peace, random, society, the Devil is a Liar

You all know that oils are kind of my passion, right? Well, just when I think I have tried almost every oil there is, I find out about one I've never heard of. This is a new try out for me: 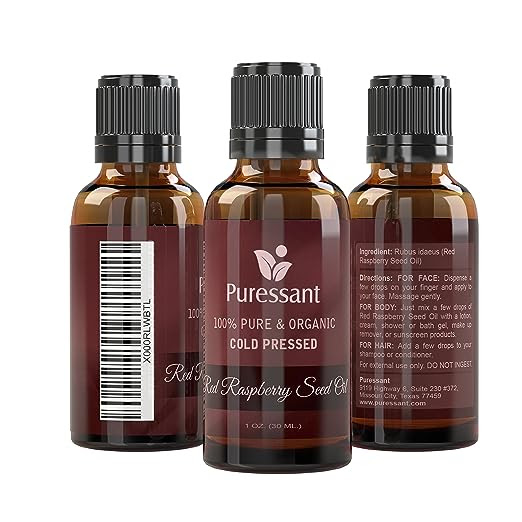 That is Puressant's 100% Pure and Organic Red Raspberry Seed Oil. It's cold pressed and comes with a 'euro dropper'.

This oil reminds me of rosehip seed oil. Except it smells better.

When I tested this on the back of my hand, I was expecting an oily texture. It does go on the skin like other oils, but it absorbs with just the slightest massaging and then it's invisible to the eye. If I didn't feel the difference in my skin, I would have doubted that I had even applied the product.

Here is where that absorbency comes into play for me: this is an oil that I can actually apply to my face without the shine or slickness. This is a great oil for adding to other moisturizers and, in fact, the back label indicates adding this to your existing hair and skin products. 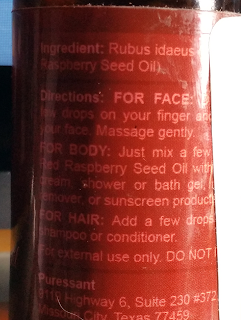 Since I hadn't heard about Raspberry Seed Oil, I wanted to check out what's being said about it:


Of course, I also did a test of applying this to my face. One interesting thing that I noticed is that, using this alone, the product has a toning effect on the skin. That's was a nice surprise because I will be able to use this as a toner in certain spots (such as on my neck and under my jawline), but still add to my moisturizing products for use elsewhere.

On my makeup-wearing days when I am in a hurry and can't deal with blotting my other oils, I will be able to use this. Right now, I am experimenting with using this on my throat at night (mixed with another oil) and, next time I wash and treat my hair, I am going to apply some of this to my scalp and the ends of my hair. I see here that there are possible benefits to both hair and skin.

The Amazon Prime price (about $13 when I ordered) on this was great, though I will say that this is one oil I would pay perhaps another $5 or $10 for. That's mostly because, since I will be mixing this with other oils and products, I will be able to get a lot of use from the 1-oz bottle. Also, I really do like the non-oily moisturizing effect. Nice plus: there is a 100% money-back guarantee offered.

I have to tell you, I'm pretty impressed with Red Raspberry Seed Oil. I'm going to be looking into more uses for this overall. Will keep you posted.

DISCLOSURE: I received this product in exchange for providing a fair and honest review.
at August 02, 2015 No comments:

Most Viewed (past 7 days)

Latest of Being Free