As you read this review, keep in mind that I just used it for the first time today**. Later on, after more use, I will come and update the review if need be.

This is the Black and Decker 400-watt Fruit & Vegetable Juice Extractor: 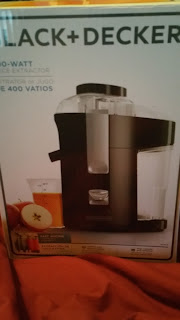 When I first saw it at the store, the first thought I had was, "How good can a $35 juicer be?" I also wondered why it was labeled as a "juice extractor" rather than just a "juicer".

Out of the box, this was easy to set up. The only thing I had to do was remove the cup from inside the pulp container.

Let me stop here and explain why I even wanted a juicer.

As you all know by now, I flip flop when it comes to taking care of myself. I go through stages of watching my nutrition and exercising better sometimes than I do other times. I'm going through one of my upswings. Going to the gym and losing weight, yada yada ya.

In addition to eating better, I'm also more conscience of my overall health. High blood pressure runs in my family. I had HBP when I weighed 97 pounds so all the weight loss and exercise isn't going to cut it. However, excersizing does help (mainly because I think it relieves stress) and I recently heard that drinking beet juice helps a bit. Well, I love beet juice. I don't love the price of beet juice, so... I decided that juicing my own would be better.

I still use my blender to do smoothies but I tend to go overboard with smoothies. I can't just do a simple fruit and veggie protein drink. I go all Guy Fieri and start adding something from every food group until I end up with something that looks like a drunken dessert.

Juicing is simpler. I do what I did tonight with the Black and Decker: chop up some beets, carrots and maybe an orange, then store it in a quart container to drink off of for a week. I have to say that the Biotta beet juice that I've bought is slightly sweeter than my homemade. which is why I added carrots and tangelos to the blend. Now mine is not only cheaper but even better than the store bought juice! Ha.

Here is my video of my first use of this:

So. On to the pros and cons of this juicer. By the way, the model number is JE2200B.


CONS:
Seriously, that's the worse thing I can come up with as a negative. This wouldn't be a big deal with most fruits and veggies, but for the beets (which stain everything), I put a plastic bag under the cup and juicer just to catch drips and spurts.

I read a bunch of the Amazon reviews (even though I purchased mine at Walmart) and I disagree (so far) with any of the negative ones. Of those complaining, most reviewers focused on the fact that they had to cut up their fruits and veggies or that the machine "clogged", etcetera. In my opinion, for this type of smaller (in size) juicer and with the 400-watt motor, I'd expect to have to do some prep. Matter of fact, some years ago, I had a very expensive juicer that didn't do as good a job as this one. With that one, I could drop in big chunks of stuff but I didn't get the dryer pulp and the cleanup was a nightmare.

Tonight I got a almost a quart of juice from 6 beets, 10 carrots and 2 tangelos (I've been drinking from it already, so...):

Like I said, for the price (which equals about 5 of the 16-ounce bottles of Biotta brand beet juice), if this gets me through the rest of winter, I have saved quite a bit of money. Plus, I'm doing something good for myself.

**I wrote this review last night before bed. Posting it today, so... ya know.
at December 12, 2015 No comments: Links to this post