Cinnamon essential oil was never on the top of my list of things to try. Then I heard about the benefits and I jumped at the chance to try this one from Majestic Pure. (Also, y'all know I have a thing for M.J. products, so...) 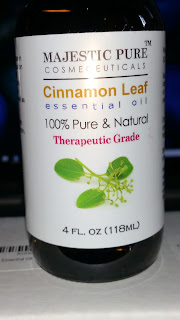 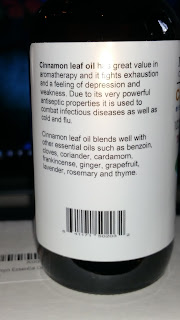 Here's the other thing: I had never paid attention to the fact that there is a cinnamon leaf oil vs cinnamon bark oil. Huh.

I had to get some clarification and this is what I came up with:

Cinnamon Leaf Essential Oil - This one is steam distilled from the leaves of cinnamon. This is yellowish in color.

Cinnamon Bark Essential Oil - This is steam distilled from the bark of cinnamon. It is slightly reddish in color with a hint of brown. 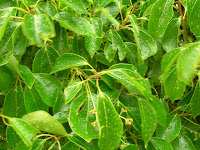 Both of these essential oils have some differences in their chemical composition, obviously because they come from different parts of the same plant. However, their health benefits can be quite similar... (source: Oil Health Benefits)

Well, now I get it. From what I can tell, EO of the bark is generally more expensive**. Okay.

This one I have from Majestic Pure is Cinnamon Leaf EO. (I'll try later to try some from the cinnamon bark.) While I've heard of Ceylon Cinnamon ("true" cinnamon) and Cassia Cinnamon (common), this bottle is labeledC/O (country of origin) India.

I've got a history with this brand. I trust their products, quality and customer service. I've never had problems with M.J. but, if I ever do, they have a full refund policy in place.

This particular item is currently $18.50 with my Amazon Priime. The bottle is a 4 fluid ounce size, which is going to be a good value with the use I'll get from it.

The fragrance is, of course, cinnamon, but it's not overly "hot" smelling the cinnamon-flavored candies are, if you know what I mean. Because the fragrance was so pleasantly "easy", I almost made the mistake of testing a drop of it (undiluted) on the back of my hand. I always like to know what an EO feels like on the skin. Good thing I followed the rules of diluting this one with a carrier oil. I used 2 drops of castor oil and the barest drop of the cinnamon. At first, there was nothing. Half a second later, I could feel the warmth.

This is some strong stuff! This leads me to the next part.

What are the uses and benefits supposed to be?

When I was young, I heard elders say that cinnamon was good for the circulation. I don't know if they meant the oil or not. I do know that it was common for people I knew to chew on pieces of cinnamon. 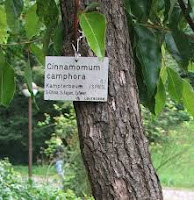 I couldn't really find anything science-based on just why cinnamon is supposed to improve circulation. I'll keep looking. For now, here are some of the benefits I see listed all over the Web:
How I am personally using this.

I have grown to trust the Majestic Pure brand and I'm really enjoying this oil. I do have to take more care in using it because of its potency. (All EOs need to be treated with caution, but something like cinnamon definitely packs natural "heat".)

I added about 3 drops to some of my homemade toothpaste. I already had a batch made with coconut oil, rice powder and clove EO. I replaced the clove with the cinnamon in a new batch before I realized I could have just merged the two. Oh well.

Since cinnamon is supposed to be good for circulation, I decided to try some on my scalp. (I'm still regretting that last hair cut!) This is when I really found outjust how potent this EO is. I mixed up three types of oils - Kukui, Emu, and coconut - and added just ONE full drop of the cinnamon EO. I used an extra dropper I have to apply this blend to different parts of my scalp. Withing a few seconds, I felt that cinnamon warmth. Thank God I used so much carrier oil! The warmth lasted for a good half and hour before it abated to nothing (or I just got used to it), so that tells how little cinnamon oil it takes to get an effect.

I have not (and don't plan to ingest this) because I need to check with my doctors first. I do use it in the humi-diffuser (I should patent that term!) in the evening. It's got a nice scent when I add some grapefruit EO. Seems to aid alertness.

The last way I tried this the first night was for my shower. I put a couple drops in a glass and sat it off to the side while I showered. When I was getting ready to rinse off a body scrub I was using, I poured the EO on the floor of the tub (away from my feet). The fragrance was yummy.

There are a lot of sources online for you to start research on cinnamon benefits. Use your own common sense when you do your research, people. Here's a list to get you going:
UPDATE: I forgot to add my most useful application for this... Duh. Because of my weak immune system, I try to stay clear of both germy thing and  the things normally used to get rid of germs. You know, chemical sprays and cleansers. This EO is great for wiping down surfaces and sterilizing my items. Just be VERY careful to spot test for damage. Also, dilute, dilute, dilute with water first!!!

** I did a quick general search and found a variety of prices on Amazon Prime items labeled as "Ceylon" cinnamon bark EO. I didn't find the prices outrageous. The big thing is to find a brand/supplier that you personally trust.


DISCLOSURE:
In exchange for providing my fair and honest review, I received one or more of the products mentioned above for free or at a discount using AMZ Review Trader. Regardless, I only review products that I have personally used and can give an opinion of.
at March 31, 2016 No comments: Links to this post