I've been tough on a lot of hair products in the past. Miss Jessie's and Shea Moisture are two of the brands that have disappointed me more than once. Both brands are very expensive for the average working class consumer so I think they should be held to a high standard. I've only found one Miss Jessie's product that I would rate as so-so (which is better than my usual Thumbs Down). Recently, I came across a Shea Moisture product that I actually like quite a lot. 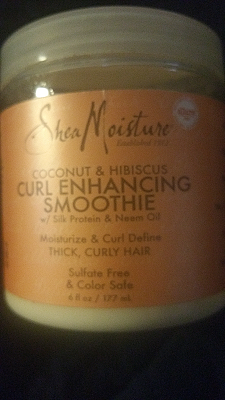 That's the Coconut & Hibiscus Curl Enhancing Smoothie from the Shea Moisture label. It self-touts that it will moisturize and "curl define" thick, curly hair. I know I should be thrilled about all the things the product claims to be free of:

Oh - and it's also color safe and carries the Allure seal. I should care about all that and I do, kind of. What I care most about though is whether or not the stuff works. That's the bottom line for me. After all, a lot of products make the same above claims, but if they don't work, none of it does me a bit of good.

So. Does this "smoothie" define curls and moisturize the hair? I have to admit that it did both for me. Also, the price works. I think I paid around $8 for the 6oz jar at Sally Beauty Supply. That's probably the cheapest Shea Moisture product I've ever seen.

Here are the other Pros: 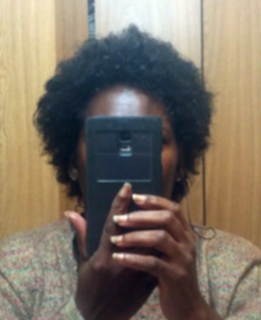 I think my favorite thing is that, because of the lasting effects, I can get so much use out of this one jar. I'm glad for the affordable price and think it would still be a good bargain if I had to pay a couple more dollars.

Now is when I will go ahead and admit that I am pretty hooked on this stuff. It's all I've been using since I got this jar.

I think I mentioned recently that, since I've changed my eating habits to keto, I've seen an improvement in the health and growth of my hair. Usually, when I get hair growth, I have problems keeping it styled well. My curl pattern gets crazy with any changes in length. This curl smoothie has been wonderful. I love being able to finger style my hair - instead of having to twist or coil it every few days. And the moisture! It's so nice to get some curl without the crunch!

(The photo is one I took for another post, but you get the idea.)

This one product has made me want to take a look at some other SheaMoisture items. Not the hair stuff because I think the smoothie is all I need for my hair. What I'm talking about is the line of makeup by SheaMoisture. I'd heard about them before but, because I was on an anti-SM groove, I refused to even think about trying something else from them. Now, maybe-maybe. If I do try the makeup, you'll hear all about it!