If you think we aren't being controlled by our electronics and gadgets, just let something happen to your computer or cell phone. Trust me, I know.

The day before I was set to travel here to Iowa, my Note 4 phone crapped out. It had been acting snitty for a few weeks - shutting itself down at random intervals and needing to be coaxed into turning back on - but I thought all it needed was a fresh battery. Bought a battery. Spent 30 bucks on a battery. Phone went from having a bad attitude to needing a spanking.

Of course, I searched online for help and suggestions. Apparently, mine wasn't the only Note 4 having toddler-tantrum issues. I found suggestions that actually worked:

I think an interrupted software update is what started these problems. Not that I interrupted the update, but that maybe the power went out (or my battery died) during an update. All I know is, I woke up one morning and realized that my phone was shut down (good thing I hadn't needed the Alarm to wake me). When I turned it on, I got a weird message on screen that was all nerd-speak: lots of red, white, and blue letters and numbers up left-top above an urgent message Not to turn off phone.

I didn't dare shut the phone off for over an hour. Finally, I popped the battery out (only way to shut it down) and did a re-start. The phone worked fine. For about 2 days. Then the random HAL2000 stuff started happening.

AT&T was zero help. They could only suggest sending the phone back to the manufacturer for a re-set. Great idea except that could take around 4 weeks. Since the phone did start occasionally behaving - with the Power-Home-Volume reboots - I let it ride. Keep in mind, I was in the middle of prepping for a move.

I could use my upgrade to the get S8, but I'm trying to hold out for the Note 8. Of course,

Something told me that I might want to have a back-up plan just in case the dang phone decided to go from toddler-tude to teen-tude.  The only backup I could afford was this lovely little, er, phone: 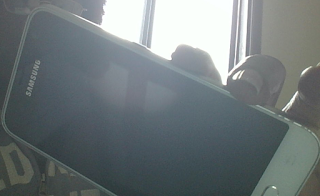 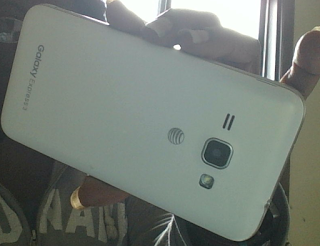 If my broken phone had teen-tude, this thing was just straight out ADHD affected. But it was only $50 and that was all I could afford because my budget is so tight that it has zero circulation.

First, let me say that this is such a first-world problem that I should be ashamed of complaining. However, we do live in a society that is dependent on electronics. Because I would be traveling, I needed a phone to stay in touch. Also, my plane ticket, boarding passes, and luggage tracking were all e-based.

My entire journey - travel and hotel - were controlled via a phone app. So you can see how I kind of needed a phone. Well, I got that Express 3. Only thing is, it can only be loosely referred to as a phone. Let me bullet-point the ways this phone has tried to convince me to check myself into a mental institution:
Don't get me wrong - I am so glad to have a phone at all. But. Dangit!

If I take a photo and want to view it - let alone share it - I have to delete other apps just to work with the photo, move the photo off the phone to the cloud or other online storage, then re-install whatever app(s) I deleted just to do all of that.

For now, I have given up on having a decent phone until the Note 8 comes out but, boy, it's getting hard not to run down and sign up for an S8. The other day, I saw someone with a Note 5 and was tempted to offer a price for it.

In the meantime, I am phone-feigning like an addict and chomping at the bit to show off some photos of my new hometown. Soon, my friends, soon.