If you have problems with dry, scaly or callused feet, I'm going to scream at you to go and get one of these: 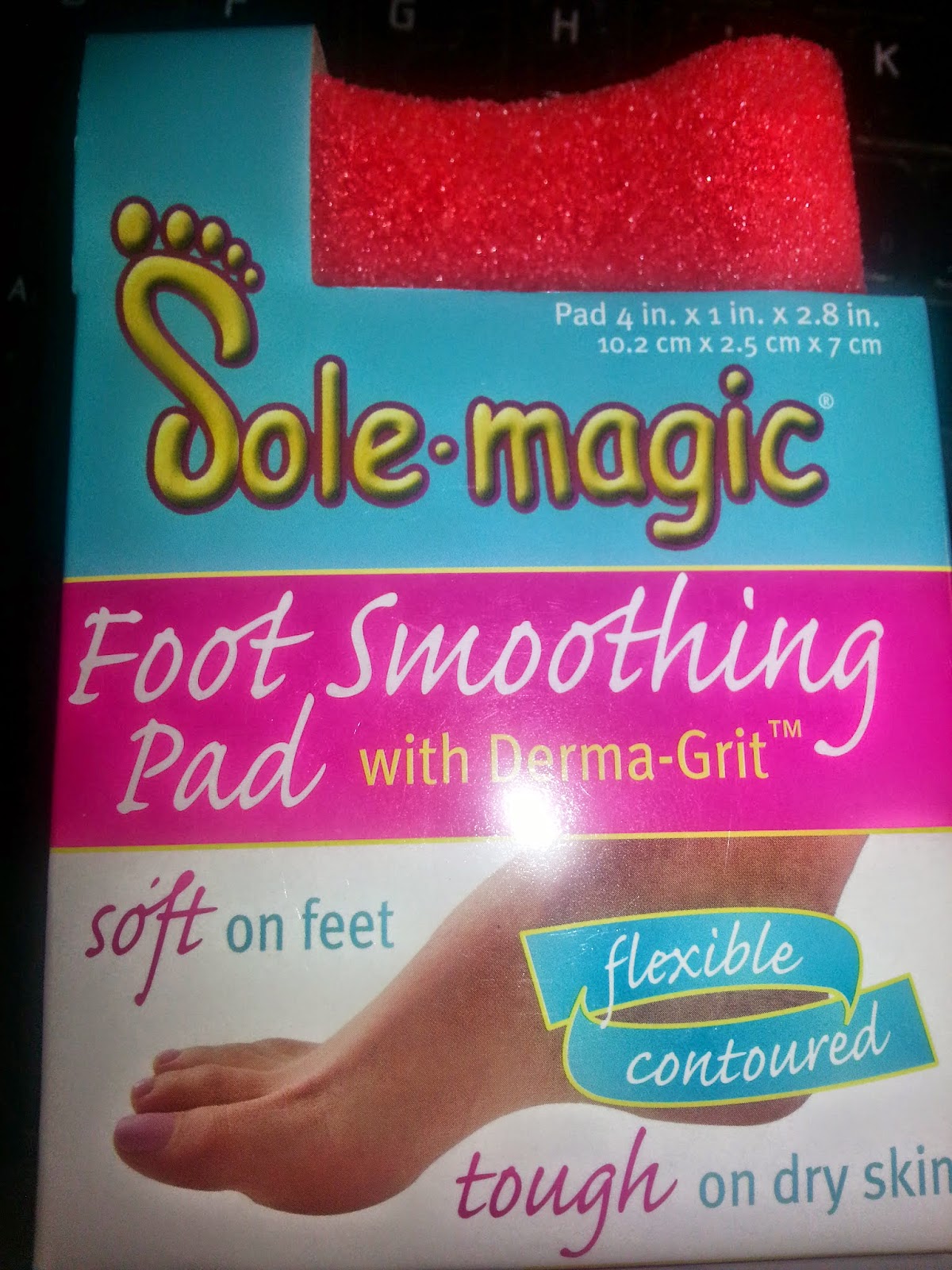 That is the Sole Magic Foot Smoothing Pad. And, boy, does it work.

You can get one of these online at the Sole Magic site. It's $7.99 (U.S.) and I'd very happily pay double (triple, if I had more money like that).  It's worth every single penny. I happened to find it cheaper and Walmart ($2.79). I found it a couple of weeks ago and, liked it so much, I went back for another one - just in case the price goes up.

I don't have money to throw around, and that I consider it a problem to "throw around" 3 bucks should tell you how hard up I am! Seriously, I have to be a little tight with the money so, when I bought this, I hung onto the receipt in case it was a dud. I have no problem returning bad products for a refund.

This is no dud. This works so well on my foot calluses, the only thing I wondered about was who the heck would be using it on their elbows. I'm not going to criticize though. My feet were so bad that I would never have taken a Before photo like the person on the Sole Magic site did. I can tell you that the photo is no trick. The foot smoothing pad works that well.

I am surprised that I never heard of this product before noticing it at Walmart. It was on one of those junky and badly placed racks where you can find everything from the latest things being hawked on infomercials to some hosiery. HOSIERY? Whatever.

The main reason I bothered to take a closer look at this smoothing pad is because I always take a closer look at any product for feet. And that's why I held on to my receipt until I saw the results I got. I have bought (and returned) so many products that claim they'll moisturize and smooth and, basically, keep you from shrouding your crusty, cracked, calloused feet in gauze to keep from offending other people. A couple of them did moisturize well (not well enough for my feet), and one or two of them lived up to at least part of the claims made (on TV, in magazines and by celebrity hawkers), but none of them worked fully as well as I'd like. One of them would have been great if it had been better designed. 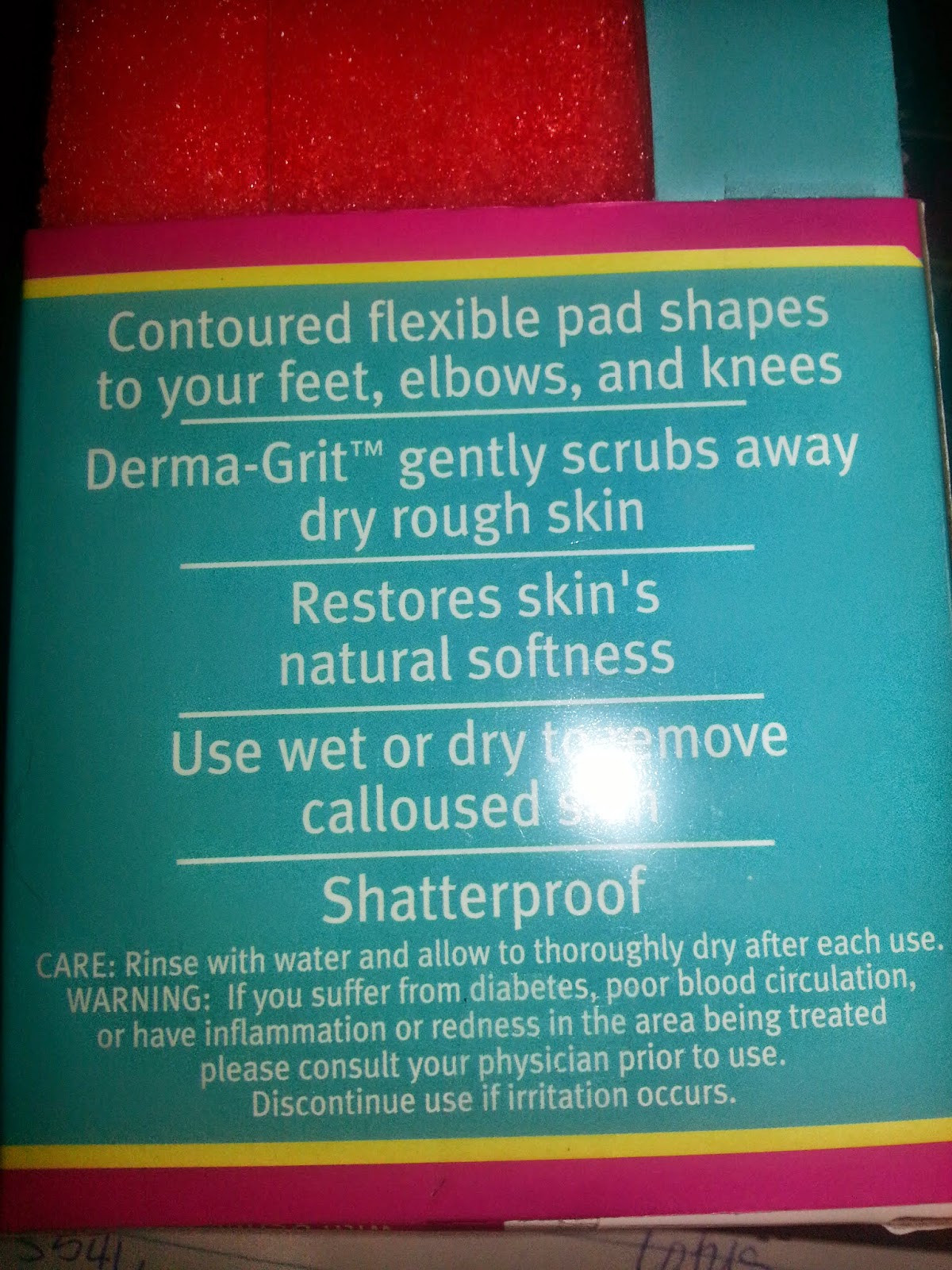 The Sole Magic smoothing pad works mostly (I assume) because it has the basic concept of a foot file worked into a great design.

It's easy to hold and grip the smoothing pad, which seems to be the best part of the design. You don't have to exert a lot of pressure to remove the dead skin from your feet. And for the calluses... Oh! It just filed them right down to nothing.

I especially like that the pad smoothes the skin on your feet (and get's rid of calluses) without hurting at all. With some other foot file devices, I was afraid to use them too much because I didn't want to end up with scraped feet. It's the same reason I don't ever let anyone use razors when I (rarely) get a pedicure.

Before using this foot smoothing pad, I had stopped wearing certain types of shoes - just because my calluses were so painful. I could never walk barefoot around the house because the hardwood floors were like torture devices with each step. I spent about 10 minutes on each foot. Most of the time was used on my calluses because they were thick and located in odd places. The way the smoothing pad is made for gripping and angling is perfect. For my heels (which aren't so bad) and just for the overall smoothing out of my feet, I was done in no time.

Like with anything that files/smoothes dead skin, you're going to get that nasty skin ash falling everywhere. I usually try to do these kinds of foot treatments over the empty tub or over a towel, just to keep down on the mess. Plus, it's kind of gross. Another benefit of using the Sole Magic smoother is that it can be used wet or dry. I did my first smoothing treatment with a dry pad. A few days later, I did try it out in the bathtub. My feet were already pretty smoothed up by then though. I think that I will like it better wet for random "touch up" treatments, but I needed to full effect of a dry pad to handle these calluses!

After treating your feet to a smoothing, you can really tell a big difference - HUGE - right away, but you will be super impressed when you apply lotion to your nice new footsies. For me, it was better than a post-pedicure feel, and it didn't take all that soaking and waiting and paying. Besides, I'd rather take care of my own feet than risk some of the infections I've heard you can pick up at a mani-pedi salon...

Depending on how well I treat my feet (keeping them moisturized) and how dry or humid our weather is, I expect to do a smoothing treatment about once a month. Just touch up work. The pad seems to be sturdy enough to last for at least a few months, maybe more.

I'd check out my local drugstores before I ordered online. If your feet are in the shape mine were, you're not going to want to wait for shipping. Plus, it's nice to stock up on a couple of better-priced products while you can.

Recently, I've been wearing all my cute boots that my calluses made just standing uncomfortable. I can't wait for summer when I can wear my sandals...