Okay, folks, this is a recipe that I modified (slightly) from the one found here. I have never, ever made a chicken pot pie - not unless you're counting the ones I get on sale in the Frozen aisle at Walmart, bring home and toss in the microwave...

I really wanted to make a homemade chicken pot pie and I was, for some reason, terrified. When I cook, I usually stick to what I know. I didn't know pot pie.

Now the recipe that I linked to is super easy, but I did make a couple of modifications. Also, I wanted to make suggestions that I think first-timers could use.

INGREDIENTS (Pay attention to the variations!)


NOTE: For those who want, here is recipe for biscuit mix that lets you adjust recipe to different serving sizes.

STEPS: (Read through these BEFORE you start!)

If you are using pie crusts for the bottom, make sure to brown them for a few minutes before adding the filling! 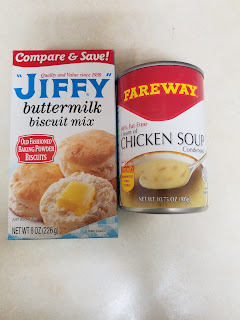 Super easy, right? The one thing that annoyed me when I first read the original recipe is the part about using the biscuit mix and the soup. Your instinct might be to go by the instructions on the labels of those items. DON'T. Just pretend the instructions don't even exist. (And, yes, I was cheap and used store branded soup!) 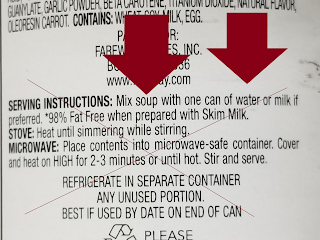 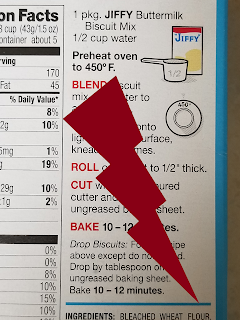 Keep in mind that this will make enough for at least 4 people. I had so much left over that I ended up sending it home with my brother and his family. Next time, I will try reducing the entire recipe so that I can make a smaller pie. Maybe I can pre-make the filling and make mini-pies throughout the week.

I love that this recipe was so cheap, easy and quick. Also, clean-up was simple, and the pie... 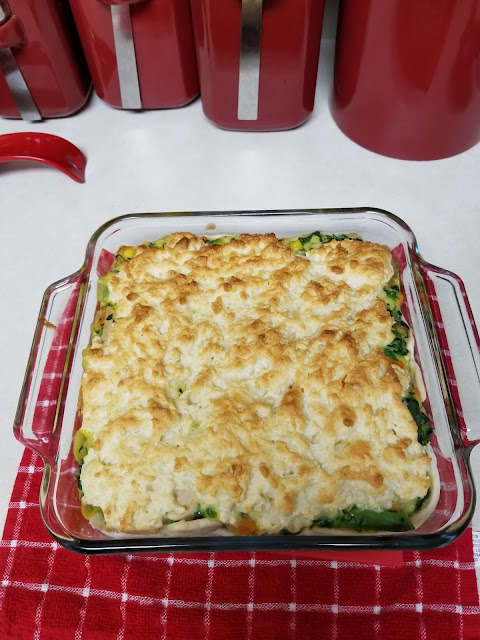 Oh my goodness! It turned out so tasty. Of course, I couldn't eat it all. I put some away for later and called my brother to come get the rest for his wife and kids. This was about a 9 inch pie and it was perfect for their dinner. After a few bites, I was stuffed. I need to find a way to do smaller servings but I'm not sure how well they will keep for more than a few hours. 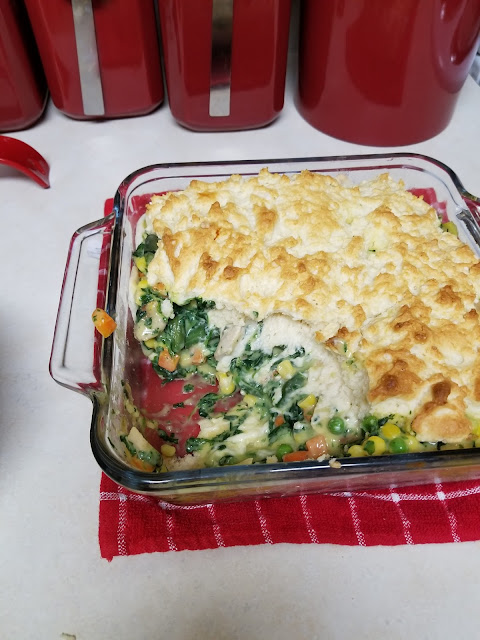 Next time, I'm going to do leftover boneless pork. I will probably try adding kale instead of spinach. One thing I noticed is that most of the spinach rose to the tip of the pie!

Some other cooks on the site where I got this recipe said that they added things like shallots and potatoes. For me, I think potatoes would be great if feeding a family, but a bit too much for a single.

One last thing: the next pie I make, I won't be adding a crust to the bottom. Even though it turned out well, it wasn't necessary, in my opinion.