My budget is about as bad as my emotions sometimes are. Broke and depressed, I have found that houseplants are the cheapest way to beat the blues and decorate a home. I've already told you all about this though. Since I haven't been driving, it's best that I do what I can online. Or maybe not.

Walmart's Garden Center had beautiful and affordable plants when I was there a couple of weeks ago. I had to look at the budget and pay some bills first so I only just now got one for $13, but I'll get back to that later.

When I saw online that there were a Cordyline and some other plants that I could actually afford (even including the shipping), so I ordered them and waited anxiously for their arrival. The shipping time was shorter than estimated. That's one good thing at least. The problem is, the plants were MUCH smaller than I thought they would be. They all - all FIVE - came in a box smaller than the one I once got a coffee pot in! 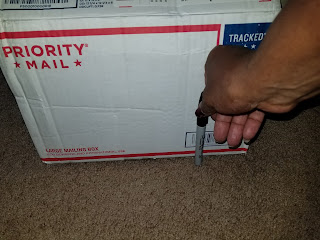 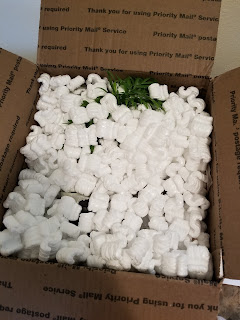 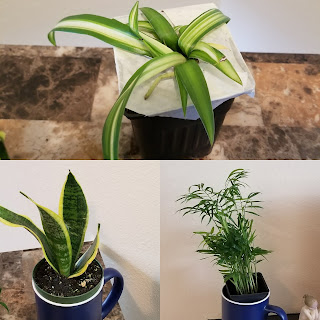 As you can see, that snake plant is a hearty little thing. It's the one I've been advising my friends to get if they have trouble keeping houseplants alive. 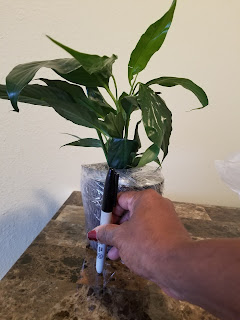 Okay, this one didn't come out so bad; it just wasn't as lush as the product photo represented. 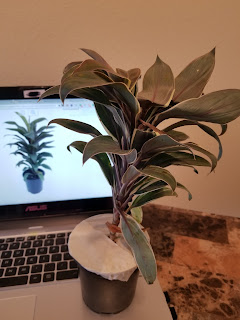 I think the cordyline was the biggest disappointment. It wasn't the size (I didn't expect a huge one), but that poor thing was all kinds of beat up! It's been about a week now and I'm slowly getting her to perk up. I was sick in bed myself the past day and a half so I checked on her this morning to see how she was doing. Thank goodness she's starting to look a bit healthier. 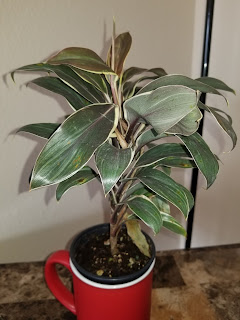 There were only three of them left. I guess I wasn't the only customer shocked to see such a great price on such a beautiful plant. I don't even want to think about what this would have cost me in Anchorage. Okay, I will guess at a low estimate of $30 maybe? I'll have to see if one of the nieces can run over and do a price check for me.

My camera does not show the full beauty of those colors. I do think the Walmart folk were over-watering her because her leaves have some browning and are brittle in a couple of places. At any rate, I love the plant. On my worst days, I will go lay in the living room just to look at all the plants and this cordyline is extra special. They should place these plants around patient areas in hospitals, seriously.


By the way, I don't see the brand of Hirt's Gardens on the large cordyline. Hmmm... This is what she looks like next to her mini-me:

Now, I don't want to bash Hirt's because I'm sure they do the best they can to carefully package the plants for shipping. I kind of want to put the blame on the carrier. I could tell when I unpacked the plants that the box had gotten knocked around - and Hirt's had boldly labeled it as holding LIVE PLANTS. C'mon now people.

Anyway, I wanted to do this post for anyone else who may have thought of ordering plants online - from any seller, not just Hirt's.

Soon as I'm feeling better, I will do another post on the plants I've collected (yes, another one!). Meantime, I'll leave you with something I recently saw on Pinterest: don't stop be-leafing.