Necessity might well be the mother of invention, but poverty is the daddy. And I know poverty.

I am single - which equals never enough clothes for a wash load until there are too many for just a couple of loads. Also, it costs a buck per load to wash (another buck to dry) in the building. Also, I wash and rinse by hand my kitchen towels often - like every three or four days - and have been looking for an easier way.

So, I've mentioned that we have a type of community table in the lobby in this apartment building. When we residents are getting rid of something useful, we put it on the table so that someone else can take it for no charge. A while back, I got a basket full of artificial flowers and put them into a vase as decor for my bathroom. 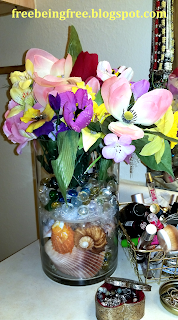 I've given (and taken) cans of food, beverages, planter pots, clothing, and wall art. Recently, I went to the table to put out some tea bags and an old juicer (that came from a thrift store this summer). This is what I found: 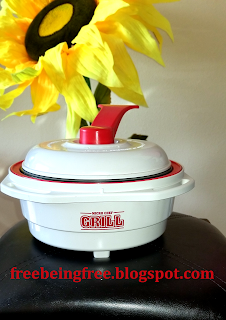 I still have to figure out how to use the grill, but... 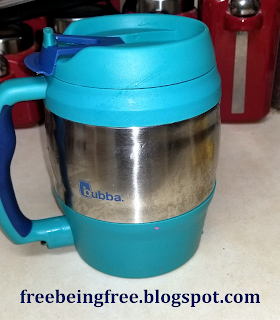 It was really dirty from use and unwashed buildup, so I cleaned and bleached it out, but I have no intention of drinking out of it. The reason I got it is because it's one of the biggest thermal containers I have seen. (By the way, I do believe that at 52 ounces it actually is the biggest.) I was just curious about it. When I looked it up on Amazon, I started getting an idea for how to use it.

First, though, I have to back up and tell you about a product I had on my Amazon Wish List (before they dumped my reviews and I dumped all my lists). It was a portable washing machine similar to this one. The price isn't bad on that thing, but I don't have the money nonetheless. So, this is what I came up with using all free parts: The mug, a kitchen scrubber with a long handle, my soap and bleach, and some calorie-burning elbow grease.


Of course, the Bubba I have 52 ounces so, of course, this washing idea is only for small loads. I was able to do four of my sink towels.

It might sound silly, but this is why it works for me:


The first time I used this, I was thinking how great it would be to have the same thing - insulated container with a lid - on a bigger scale, but we all know I don't have the mind power or energy to do anywhere with that idea.

Anyway, I hope this was helpful to someone or sparks a creative idea in their mind. Knowing me, this seems like a great idea now, but I'll be wondering tomorrow what the hell was I thinking!