Well, this is one of those columns that I'll be pulling out of my Drafts folder until I can write more posts. I'm currently too occupied with other stuff so do enjoy this.


This is the tea I treated myself to a couple of weeks back. 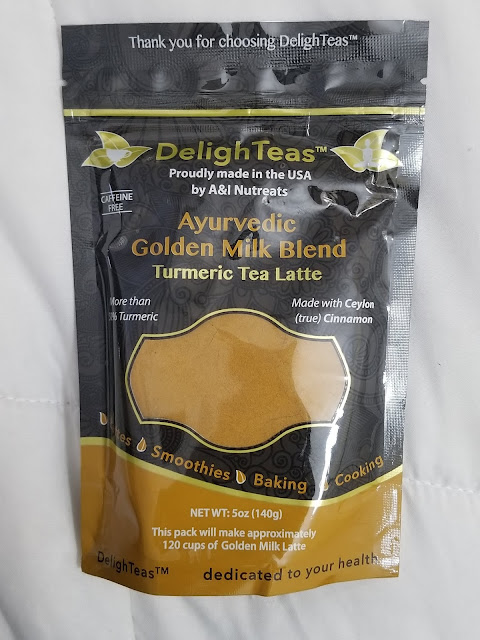 That is an  Ayurvedic Organic Golden Milk blend Tea Latte.

Fifteen bucks is a lot of money (for me) to pay for a 5-ounce bag of tea so this really was a treat.  On the other hand, I had already been adding turmeric (sometimes with Ceylon cinnamon) to my coffee and teas for a long while because I know that turmeric has a lot of health benefits. What I didn't know is that adding pepper to the turmeric and cinnamon helps the body better absorb the best properties of the spice.

Keep in mind that, whenever a product has any health benefits at all, people get carried away with making further claims about it. Something starts out being good for one thing and before too long someone is claiming it as a cure-all for every malady known to man. All I can attest to is that using turmeric makes me feel that I am doing something good for my body. You know, to counteract all the smoking and cussing.

If you really want to know the benefits, talk to your doctors.


(By the way, can we pause just for a moment to discuss the spelling of turmeric? Is it one of those weird Mandela Effects or has it always been TURmeric and not "TOO-mer-ic"? I could have sworn it was 'tumeric' all along. Grammarly disagrees with me and so do the dictionaries I checked. Weird.)

Since I am not a fan of anything too spicy, I was worried about the pepper in this blend. No need. The pepper is discernable but not off-putting. And I am super tastebud sensitive to peppers of any kind. I first tried drinking the tea with only plain warm milk, but it was too "heavy" tasting. I added just a little bit of honey and that evened out the flavor nicely. Keep in mind though that I'm not a big fan of black coffee either.

The part of the product description that convinced me to try this tea is where it states that it's an "Ayurvedic blend that promotes digestion and immune support". I was paying the most attention to the immune support part but the most immediate effects were on my "digestion". Let's just say that this tea has a very mild (but effective) "anti-constipation" effect. ( I know that sounds awkward and indelicate but you try finding a more ladylike way to say it and let me know how it goes.)

I have come to really enjoy the flavor of the tea and I like the peppery 'bite'. Even better than the taste is the slightly warming sensation as the spices hit your mouth and throat. It's very soothing and relaxing. After drinking a cup of this tea and hitting the CBD vape a couple of times, I sleep like I've never sinned.

There are a few more things worth mentioning. For one, I have tried this a couple different ways. Adding it to warm milk with a touch of honey is my favorite. I didn't enjoy blending this into a smoothie (using coconut milk, honey, and ice). I never did try adding it to food because I haven't baked anything in a while. I will have to give that a try. Next thing is, when I do make a milk and honey tea with this, a lot of residue remains in the cup. If I try swirling or stirring in between sips, the residue is too gritty to be pleasant. The last thing to mention is DO NOT GET THIS ON FABRIC. Turmeric is extremely staining. Some of my favorite kitchen towels have permanent bright yellow stains from cooking with and drinking turmeric. The stains are easier to clean off counters if you use bleach or a mix of vinegar (or peroxide) and baking soda. It's easier to just mix this directly over a stainless steel sink. Oddly enough, the turmeric doesn't stain your teeth.

Like I said, I haven't done so yet, but I can't wait to bake this into some of my brown sugar bread. I sometimes add plain turmeric into baked goods and have never had any problems.

The best way to gauge how much I like something is whether or not I plan to buy more. And I will be getting more of this tea. I think it will last a while because I use it maybe once every other night and it only takes a half teaspoon to make an 8-ounce beverage.

Love this song but that's some seriously new-age-y album art.
I just checked them for the first time & the
lyrics are straight-up new age. All I ever heard was "Shine!"
at June 18, 2019 No comments: Links to this post