Yesterday I had it out with a bra in Walmart. This bra: 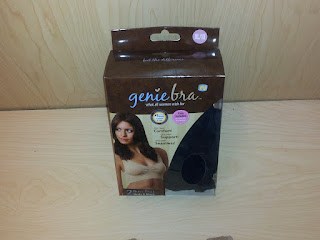 Yes. The "Genie" bra. "As seen on TV." According to Tristar Products (they rep the item), with the Genie Bra one can "enjoy all-day comfort and support."

Well, I guess so. I mean, anything would be relatively comfortable after contorting yourself to get into the damn thing. (Side note: I just noticed how much I italicize when I'm pissed off or being sarcastic - in this case, both.)

If I dared, I would post pics of what I looked like trying to work my way into this contraption. I don't dare. I almost need sedatives to let my doctors see this body... But I'm getting ahead of myself, so let me back it up for a sec.

I went to Walmart specifically to buy a bra. After months of being in denial, I have accepted the fact that I've gained 63 pounds (yes, that much) and that my perky little 38B's have turned into 40C's. (I swear I believe that most of that is just re-positioned fat and not real titty. I dunno.) I have dreams about the day I can venture back into a Victoria's Secret store... For now, I am out of the market for cute bras like...

... and into plain black, white and tan blah-bras. I've even stopped caring about style. I'd wear a slingshot if it fit. (We won't even talk about "pannies" other than to say that I now wear only the boy-short variety. Also found at Walmart. In black, white and grey. I may never have sex with the lights on again. Why I am playing? I may never have sex again. Period.)

Anyway, bottom line is, I no longer wear underthings that can be described as "scandalous," "deliciously teasing," or even "minutely attractive in the barest and most common way possible..." Nope. In just a few months, my entire wardrobe has gone from Working-Gal-Funky to Homebody-Frump. Mature-and-Sexy to Old-and-Slumpy. It's hard to be attractive with this body and no money. Fat and broke. Damn.

Now, before I get my ass kicked by some other women, let me say something. I know there are the Big & Beautiful females who look damn good and can pull off sexy that will melt a man's shorts right off. I have those women in my own family. Being that way (being any way) takes a woman years of getting comfortable with her natural body. My natural body was a size 0 (teen-aged years to 20's), size 4 (20's to 30's), size 6 to 8 (30's to 50). I didn't feel really good and confident about my body until I was around 40. Seriously. I knew how to walk and sit and prance and dance - In. My. Natural. State.The size I am now, I can't even cross my legs without getting seriously out of breath. That's not sexy. Hell, that's damn near not even normal. Hate me if you want, but that's how I feel.)

Sorry to get off track. For a minute there, I forgot to tell you what happened in the fitting room at Walmart!

So, I'm browsing the aisles on my way to the underwear section when I see a display of the Genie Bra. My sister and I had been seeing the TV ads and wondering if these bras really were "all that."

The first thing I noticed was the price: $19.99. For 2 bras. That sounded pretty good since I was expecting to pay around $20 for one decent bra. (By the way, Frumpy is cheaper than Sexy.) The other thing I noticed is that the sizes were given as shirt sizes (i.e. "XS/S," "Large," etc.) instead of cup sizes.

I should have had a clue then. The chick on the cover of the box should have been the other clue.

Being realistic (mostly) about my the current state of my body, I picked up a "Large" and headed back to the fitting rooms. The attendant/clerk name-tagged as "Sue" had attitude while she led me to a room (Cranky bitch. Acted like she was pissed about having a job.)

Now, the bra itself is not awful looking. Just kind of plain-janey. 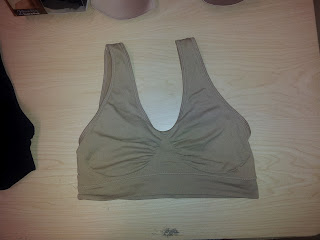 Notice that this is a "pull-over" style. That's tricky if you don't want to muss a hairdo. My hair is short & natural, so no problem for me there. My problem was that whoever determined the sizes on these bras might have been a tailor for Barbie dolls at some point. This thing barely fit over my head. No way was I going to try pulling it over my boobs.

I wanted to ask "Sue" to bring me the next size up, but when I peeked out the fitting room door, she glared at me like I owed her money. (Again - bitch.) I might owe every-damn-body else in the world, but not this heffa.

Skip to size 1x, 2x and 3x. I brought them all back to the fitting room.

The 1x - no go. It got stuck partway over my head. I forced it anyway, got it over my boobs and almost lost consciousness. I thought I'd have to cut my way out of it, but managed to escape without scissors. Somehow.

2x. I got it over my head okay. Whew. Got it over my boobs with same results as above (except I could take small gasps of air). The bra was on! I couldn't move much and I'm pretty sure that my already high blood-pressure was on the rise. I was kind of relieved about being in the bra at last until I noticed that the bottom part was rolling up. That really hurt my feelings. I never felt so fat. The more that fabric rolled up, the more I felt like a sausage whose casing was coming apart.

Now I noticed the real problem with the Genie Bra: the cup sizes were all the same!

I matched the cups of all three sizes and - yep. Same cup size, no matter what. Basically, even if you manage to get the contraption over your head and onto your body, it does you no good if you have more than a handful of boob. I always had and still have a handful - for a good sized pair of hands, but what about someone who is truly blessed? Poor thing would look like she had a frontal hump instead a nice rack. And on top of that, she'd be in cardiac arrest from being squeezed to death.

On the positive side (uh, yeah), for anyone who can fit into the Genie Bra, I will say that it seems very sturdy. The colors are decent and the bras come with removable padding, which is nice for laundry purposes. And, again, you can't beat the price. 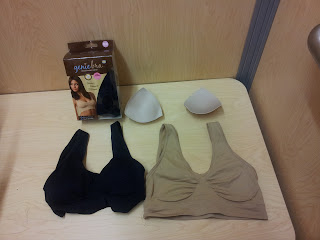 Damn Genie Bra. Obviously, the thing is made for a well-endowed doll. I was pretty depressed because there was a time - like a year ago - when I could have fit this bra and worked the heck out of it.

When I left the fitting room, there was old "Sue." Cow. Just to be spiteful, I stood right near her station and called the manager to complain about her attitude. She ignored me, then rubbed it in by being super sweet to another customer. I hope she gets an all-day toothache. (And, by the way, did you know that Walmart posts the manager's number all around the store? Handy.)

I ended up buying a few $5.98 bras in different colors by Simply Basic

On my way out, I stopped by the display just to take a peek at what a size XS/S looked like. I left the store feeling damn near suicidal.