Men like talk about the complexity of the female mind.

I think men are just as complex. If they talked to each other more, they might realize that.

Women talk. We talk to each other and about each other. I talk to myself at least three, four times a day.

Last night, a couple of girlfriends and I sat around talking. B and I started out trying to talk T through her bad feelings about a recent breakup. That led to all of us trading relationship stories.

B is madly in love with a man who is not as in love with her. I think that's crazy but understandable. The heart is the heart and not the brain, right. (And, yeah, she reads this blog, but everything I say here I've said to her face. No secrets in this friendship of ours.)

T just broke up with a guy who has anger issues.

I am separated from a man who has every issue from A to Z.

T is lucky (or smart) because she got out of her situation before it got too ugly. B and I have been there for the "too ugly" part. What made T finally leave her situation was the threat of being hit. She is embarrassed that it got that far. She's isn't alone. Some of us got that far and took it some miles further.

B admitted, "Shit, the man I was with a few years ago once hit me so hard, my feet came up off the ground."

I can't stay silent anymore, so I tell them, "You know how you get hit so hard that you see stars? T** slapped me once and I swear I saw whole constellations."

Wow, that's so hard to say.

"Where you that in love with him?"

I'd never thought about it until T asked. I surprised myself when I admitted, "Not by then. I think I was addicted. To him, to being with someone, anyone."

Even B is surprised. I've always been the woman who could do it on her own. The strong one. The don't-take-shit-from-a-man one. Then I fell in love. Or in stupid.

I get mad because they are looking at me now like I'm someone different than I was a minute ago. I tell them, "You've been there, both of you. It's easier to be with the bad guy when being without him might be worse."

T left her situation when she felt threatened. I left mine when I started sleeping with a bag packed and the phone set to 911.

Desperate to be loved. Me a little more than T.

And then there is B. She isn't being hit, but she is getting hurt.

What she wants to know is, "How do you leave when all the guys does is love you just a little less than you need?"

There's no answer for that. Years ago, I would have said something like, "As fast as you can." Or, "I've never loved anyone who didn't love me back." (And I might have been thinking how stupid she was to be in such a situation.)

I can't say or think that now.

Anyway, B and T and I never did solve any major problems last night, but we did find a little peace in our situations. First of all, we are not alone because we have each other. Second of all, we are not alone. Just by being in the company of my girlfriends, I feel loved. If only men could understand that and get with the program.

So, what does a woman do? Go out and let someone all the way into her heart - one more time? Or not?

I've decided not to look for it, but to hope for it, wait for it and, if it happens, just let it. My mother used to tell me something along the lines of how we can either let love surprise us, heal us, give us just what we need, or destroy us.

Here's something I saw on G+ the other day. Says it all: 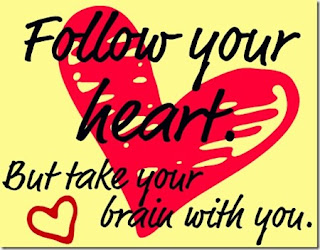