My best friend and I were talking (because we talk on the phone at least once a week) and I asked her if she wanted to find love again. Her answer was that she had never found it before and that she is no longer looking.  Since I guess I am relatively younger (she's 20 years my senior) she lobbed the question back at me. My answer is more complicated.

Here's the thing: I've not been good at or "lucky" in love. A just-uncoupled friend sent me a meme once that said, basically, that being in love and being in a relationship are two different things That is so true that it stings. So, I guess I would take either - love or the relationship - but would prefer the latter.

Love is tricky and, in my opinion, very rare. I know that a lot of people talk about being in love and having found the love of their lives but I think it's more complicated than that. I believe that most people have just found someone they can love and be happy with. I don't think that most people find their truest love or "soul mate". Sorry if that offends anyone.

So, yes, I would love to be 'in love' - who wouldn't? I'd love to just be with someone who most perfectly matches the edges and curves of my soul. That probably won't ever happen but I never give up hope. I would, at this point, settle for being in a really good relationship. And I consider a good relationship being one based on comfort zones, acceptance, and loyalty. I'm not a person who likes to be smothered. I don't want someone breathing up all my air and I don't want to suffocate them. I'm too much of a hermit crab (Cancerian here, remember?) but I do want to make someone happy and I'd prefer not be grow old(er) alone. I take that back. I don't want to grow old lonely.

A long while back I posted what some children had to say when asked: "what is love?" Kids are so damn pure! One of my favorite answers was given by 4-year-old Billy:


'When someone loves you, the way they say your name is different. You just know that your name is safe in their mouth.'

Billy was four at the time, people. I can't imagine the man he will grow up to be.

A 7-year-old Noelle gave an answer that, in my opinion, describes a relationship:


'Love is when you tell a guy you like his shirt, then he wears it everyday.'

She has the concept down. There is a tricky difference between loving someone and being in love with someone. It took me until my thirties to figure that one out.

So, love or relationship? Again, I'd like to have both. I'd rather have my name safe in someone's mouth, but I'd take having them just care enough to make me a priority. 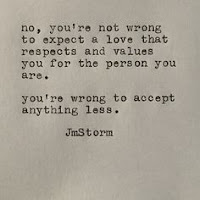 I don't think there are many men out there who would want a relationship with me. For one thing, I'm more sensual than sexual and I get the feeling that most men my age date younger because they want children or porn-like intimacy.  I'm the chick who needs my space when I need my space but will often want to sleep in a cling-wrap cuddle.  And I don't like having mundane, pointless conversations because nothing should be mundane and pointless. How nice to be able to enjoy someone in their silence... I want a person who has their own "thing" - something they care so much about that they don't mind if I don't care about it with them; something that gives them a reason to have their own space every now and then. And I want someone who has gotten over themselves enough to be flawed and awkward; someone who can laugh and cry and think without caring what anyone thinks of them for laughing, crying or thinking. I just want someone who makes me feel comfortable being who I am. I remember being married and waking up early just to get rid of morning breath and crawl back into bed with the whole fake I-woke-up-looking-this-good. F*ck that! 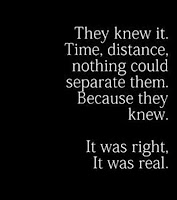 Someone once told me that, often, people aren't looking to be loved but looking to be rescued. This may be truest as we age. For certain, there is hope for older people looking for actual love. One of the people who used to live in this apartment building started seriously dating a few months back. And get this: he is dating someone around his own age! The judgemental witch that I can sometimes be was surprised by this. The guy is nice-looking and I suspect that he is really comfortable in his retirement (some seniors here hide their money to live in the building), and he likes to 'party' (read that as hitting up the VFW almost every night). He even asked me out once. Alas, I don't 'party' like that. Of course, because I can be bitter and critical, I just knew that dude had hooked up with someone half his age. Nope. She's kind of hot, but she is most definitely "mature". He likes to bring her by every now and then when he visits with his buddies who still live here. I'm a little jealous now. LOL

As for my best friend, I tease that she doesn't have to be looking to find love. As a matter of fact, I think it's when we aren't looking that it finds us. Now I'm a little scared.

P.S.:
I am such a fan of  JM Storm (his Facebook link). He's prolific on Instagram and has books and an Amazon page.
at April 18, 2019 No comments: Links to this post