What We Won't Do for Love (or Attention)

***Before I start my actual post, let me go ahead and get something out of the way: Valentine's Day is almost here. As always, I'll get my box of chocolates from my nephew DJ, which he will eat for me. My platonic guy friend will probably get me a Google Play card, same as he did for Christmas. (Don't laugh. A piece of my heart can be had for a Play card.) If anyone really loves me, they won't get me anything to send me running out to Planet Fitness.

As Valentine's Days go, mine won't be so bad. I have a date with DJ, who will whine (when he gets sleepy) and dine me with fish-sticks and Ranch dressing.

If you are one of those people who will be crying your way through a flower-less Friday at work because you don't have a sweetheart, think about this: you may not have a Mister or Miss Right, but you also don't have Mister or Miss Wrong.*** 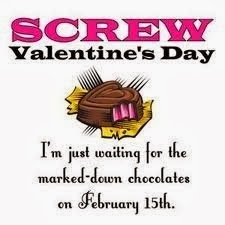 Now. On to the post, which could be a related topic...

This morning, I saw an article online about a woman who had some type of cosmetic surgery called "dimpleplasty". I'm so serious. This lady had a surgery to give her dimples.

The other day, I posted about "tongue patches" for folks who want to lose weight. Now, here is a woman having a surgery because she wants what her favorite celebrity has: dimples. I'm afraid to question her common sense in case I get sued since she is apparently book-smart enough to be a "trainee lawyer". ~sigh~

When I read about this, I wanted to wave a lighter in the air and sing "Where Have All the Flowers Gone?"

I get it that everyone wants to be attractive, but what happened to individuality and originality? I'd like to be a few inches taller - like, say, a fashion model - but I'm not going to go and have surgery for that.

The crazy thing about this is, whatever you do already have, someone else probably wants. Are we going to start swapping out one person's best features for another's? Such silliness!

The thing I really don't get about some of the plastic surgery stories I see is that there was nothing wrong with the patient in the first place. This story about the already adorable lady who wanted a heart-shaped face really threw me. In my opinion, the "Before" look is the one that wins. I don't even want to talk about that "After" shot other than to say, "Yikes!"

What I wonder is why people have all these crazy surgeries. Is it to be more attractive or to feel more attractive? I'm asking because, I don't see a whole lot wrong with the originals. Frankly, if I was a guy, I don't think I'd be turned on by someone who paid to have holes punched into their face. Not sexy.

Anyway, you know me. Once I get on a roll, I just keep spinning. I clicked on a story about this person who paid big bucks to look like the Devil. I almost passed out from pain just reading that his surgeries were done without anesthetics. He's had his eyes tattooed and his tongue spliced - sorry, I mean forked. Ick. And he's not done because we all know the Devil needs a tail... Wow. (As a woman with a two-year old as her date for Valentine's Day, I'm a little bitter right now because I just know there's someone Googling this guy to hook up as I type this.)

I don't know about you guys, but I don't even like wearing uncomfortable shoes to look good. I mean, I will, but when I do, I pop a couple of ibuprofen tablets beforehand. For surgery to punch holes in my face or have my eyeballs tattooed, I'd need to be put into a coma first.

When are we going to stop with the craziness and just be as we are? What really makes a person beautiful is when they work with what they have. Looks really aren't everything. We've all met the attractive person who couldn't hold our interest for more than two seconds, right? Or we meet a person who just knocks us right out of our socks with a goofy smile or an amazing personality.

If we are honest about it, none of us are really looking to be 'beautiful' or 'handsome'. We are looking to be attractive and charming - which is, basically, the definition of charisma. Since being charismatic takes confidence (at least outwardly), the folks relying on surgery are betraying their weakness from the start. I'm not sure I would be attracted to someone who needs more than a little makeup, fitness and grooming to feel good about themselves.

When I think of men I find incredibly sexy, it would be hard to sell them by just describing their looks:

But you get what I mean though, right? You either have 'it' or you don't. You can't get 'it' with surgery, but you can with a smile, intelligence, humor and - most of all - being interested and interesting. I fell in love with my first husband when I saw him standing over a sink of dishes with his sleeves rolled up. Most women have a thing for seeing a man show kindness to children (which is why some slick guys 'borrow' nieces and nephews for trips to the mall).

What we all need to do, instead of whining about the lack of available partners, is give someone five minutes of our time to see if it's worth spending more time with them. Making friends and finding partners would be easier for all of us if we could get over this obsession with caring only about looks or status. Until we do, there are going to be a lot of people celebrating Stag-entine's or Gal-etine's instead of Valentine's Day.